Hello All! Hope everyone is ready to enjoy the upcoming spring weekend!

We’re sorry we’ve been a bit quiet here on the blog, we’ve been diligently working on our new exhibit The Grand Prairie Story which opened to an enthusiastic crowd this past Sunday, March 15th. We are currently working on Hidden Underfoot: Historical Archaeology in Illinois which will open on April 19th. 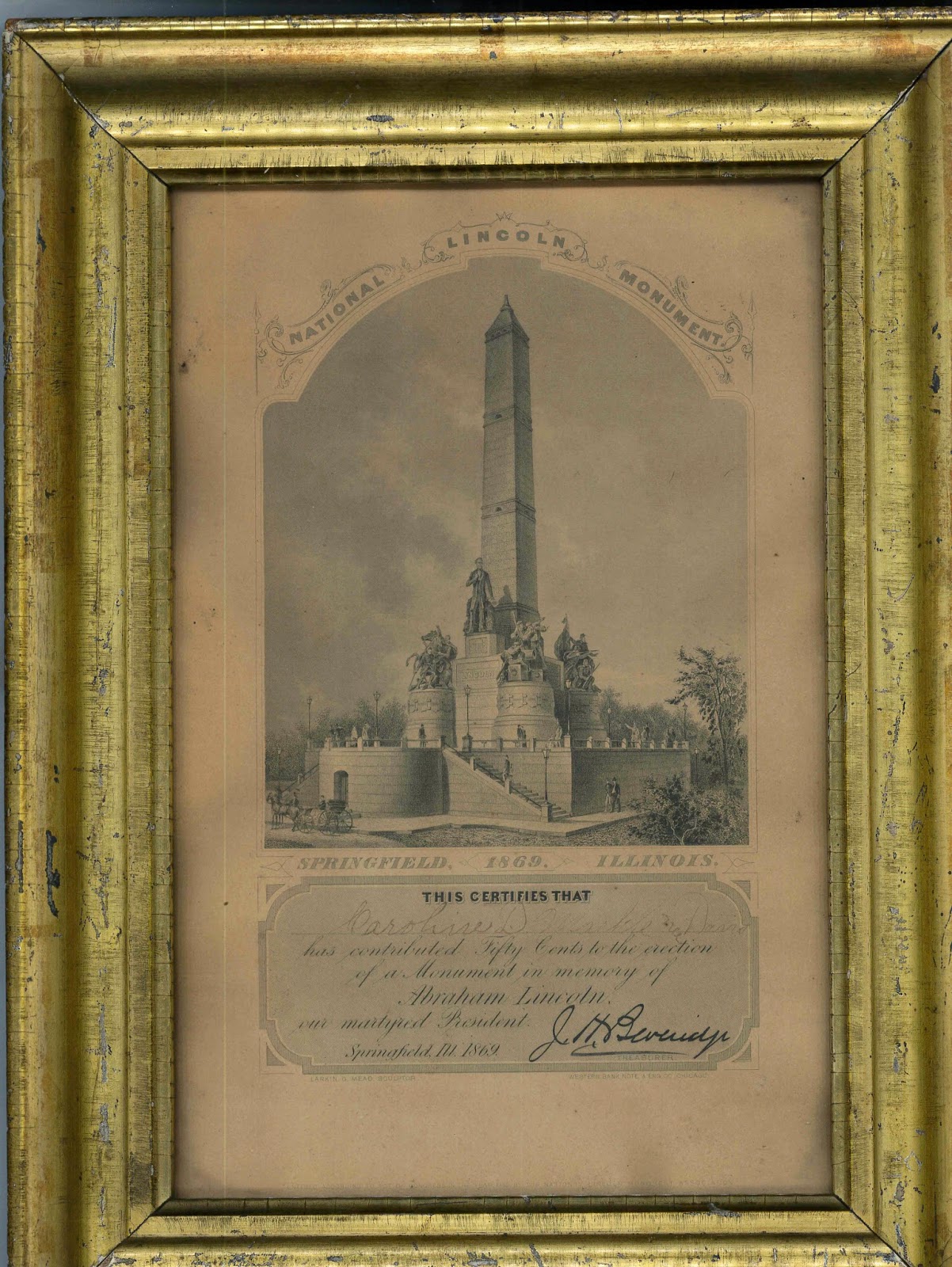 Another major project we’ve been working on behind the scenes is a collaborative online exhibit project led by Ford’s Theatre in Washington, D.C., called Remembering Lincoln. The exhibit commemorates the 150th anniversary of the assassination and funeral of President Abraham Lincoln. The Museum of the Grand Prairie in collaboration with local collector Kent Tucker scanned, photographed, and uploaded a number of items in contribution. From foreign newspaper accounts to photos of the funeral train to first person accounts of reactions to the news of Abraham Lincoln’s death in letters and journals, the items give an intricate look at the Nation’s relationship with a beloved president. You can view the exhibit here: http://rememberinglincoln.fords.org.

If you’re still interested in seeing and reading more about this commemoration look for #RememberingAbe on Twitter and Facebook where the contributing institutions will be sharing more!

If you’d like to come in to the museum and see some of the objects in person, we will be having another new exhibit in the upcoming weeks entitled Lamented Lincoln. The exhibit will feature a number of the objects we have on loan and in our collection related to the assassination, funeral, and tomb of Abraham Lincoln as well, giving visitors an up close and personal encounter.   We’ll update you soon here on the blog and social media to let you know when it opens!

We'll also be commemorating Lincoln at an event here at the museum:

Tuesday, April 14
FAREWELL TO LINCOLN
Museum Education Center, Lake of the Woods Forest Preserve, 6 – 7:30 p.m.
Today marks the 150th Anniversary of Abraham Lincoln’s assassination. Join us for a truly unique experience at the Museum of the Grand Prairie as we explore the repercussions for a nation healing after the Civil War while mourning a beloved President. In collaboration with the University of Illinois Sousa Archives and Center for American Music, we will feature a brass ensemble performing music contemporary to Lincoln’s death, while staff and community members give readings from first person accounts, prose, and poetry. From Ford’s Theater to Springfield, Illinois we’ll examine national and local reactions to this important time in history and experience the powerful effect Lincoln had on Champaign County. Free. For more info: (217) 586-2612, svoskuil@ccfpd.org, or kriopelle@ccfpd.org.

Hope to see you here at the museum soon!

A Night at the Museum (of the Grand Prairie)

Recently, I spent an entire night locked in the Museum of The Grand Prairie. Ameren, the local utility company, had to perform some routine repairs to the electrical service that supplied power to the Museum. This left the facility and its contents vulnerable for a period of six to seven hours without any fire protection.

My role during this excursion was to be the onsite "fire-guard." Each hour, I performed a safety sweep of the complex, visually checking to make sure everything was normal. If by chance something was to go terribly wrong it was my job to call 911 and alert emergency personnel. To my surprise I ran into several notable individuals and some unique creatures during my stay. Each had some great stories to share.

Among the most notable was Abraham Lincoln. He told me of his journey through Champaign County which eventually lead to his election as the 16th President of the United States. I was amazed as to how tall he was, towering over me at 6' 4". I even ran into Stephen Douglas who opposed Lincoln in the 1858 race for the Illinois Senate.

There were even a couple of local residents that stopped me to share their stories. The first was a young man by the name of James Kinley Stewart. After graduating from Urbana High School, James enlisted in the Army. He shared with me a letter he had sent his parents while serving overseas. He even mentioned his Unit’s movement during the Battle of the Bulge during World War II. James was kind enough to introduce me to another area resident by the name of Zay Wright. 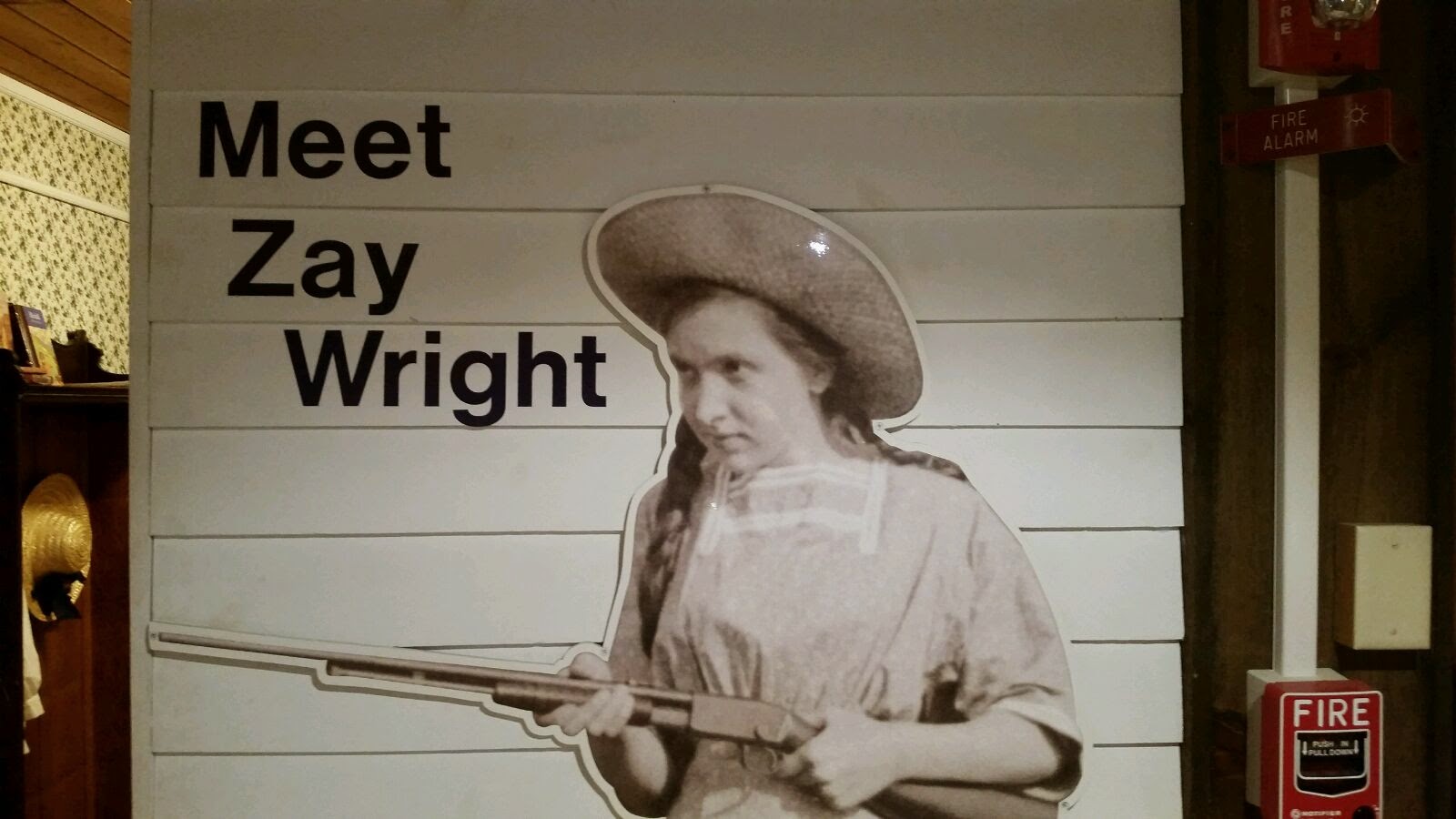 Zay was from Champaign and attended Illinois Women's College. She was inspired to become a writer and went on to become a reporter for the Urbana Courier and the News Gazette. Zay even gave me a peek inside her diary which consisted of some magnificent photos she had taken throughout her life. (Editor's note:  Pages from Zay's diary form the background of our blog website!) 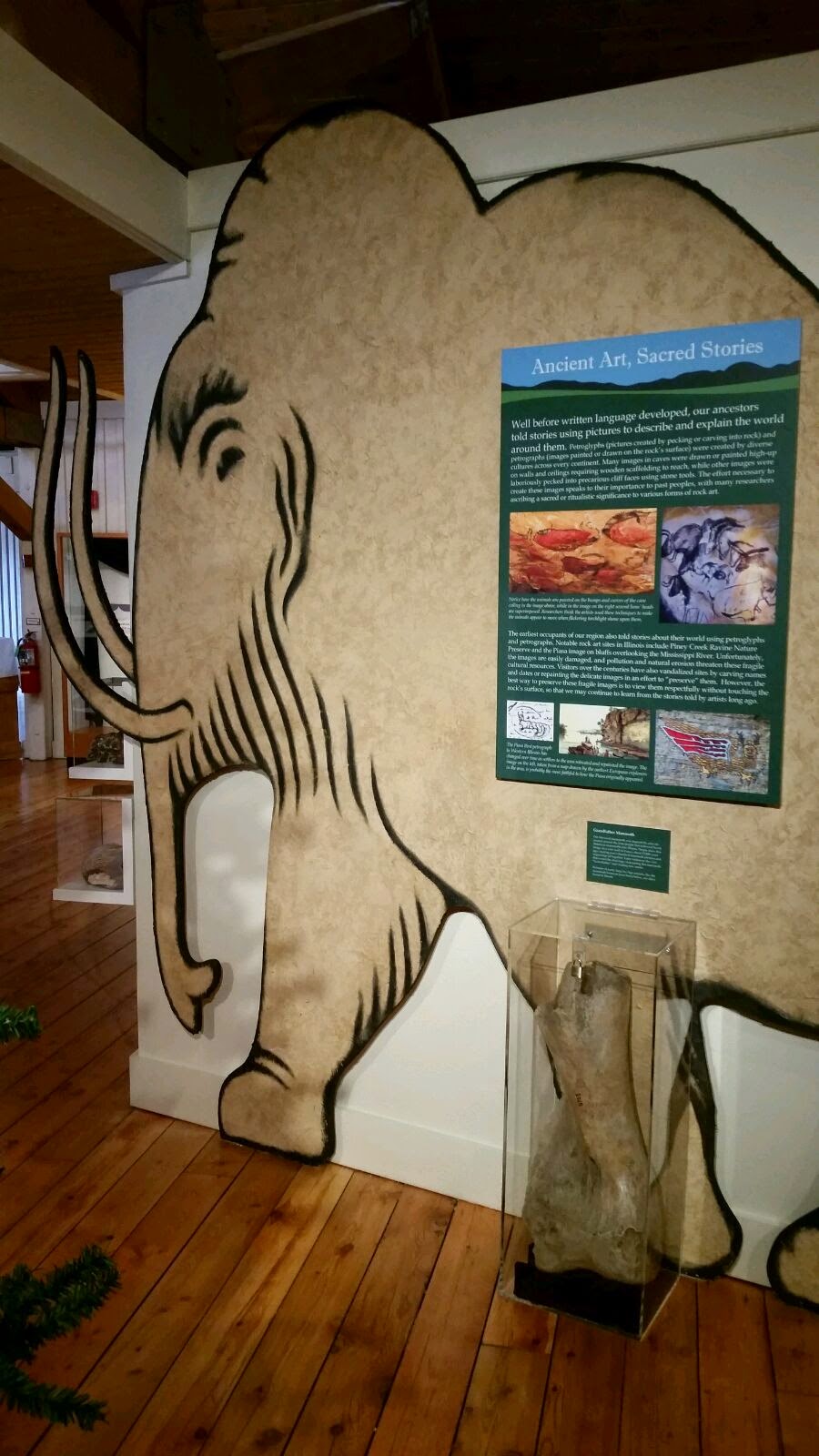 Oh, before I forget, I have to tell you about the animals that have made a home at the Museum over the winter. Traveling all the way from the Ice Age is a mammoth. It's kind of hard to describe but is similar to an elephant. Talk about huge!  You should see the size of its leg bone! I also saw a porcupine and a bobcat. They were both a little skittish around me at first. By the end of the night they told me they were glad I stopped by and that they planned on sticking around for a while.

I am happy to report my stay ended without any issues and everything is back to normal. Overall I had an interesting night and have earned a greater appreciation for all of the hard work the Museum staff does to preserve our history and share the story of the Grand Prairie. I can't wait to bring my niece and nephew to the Museum and introduce them to all of my new friends! 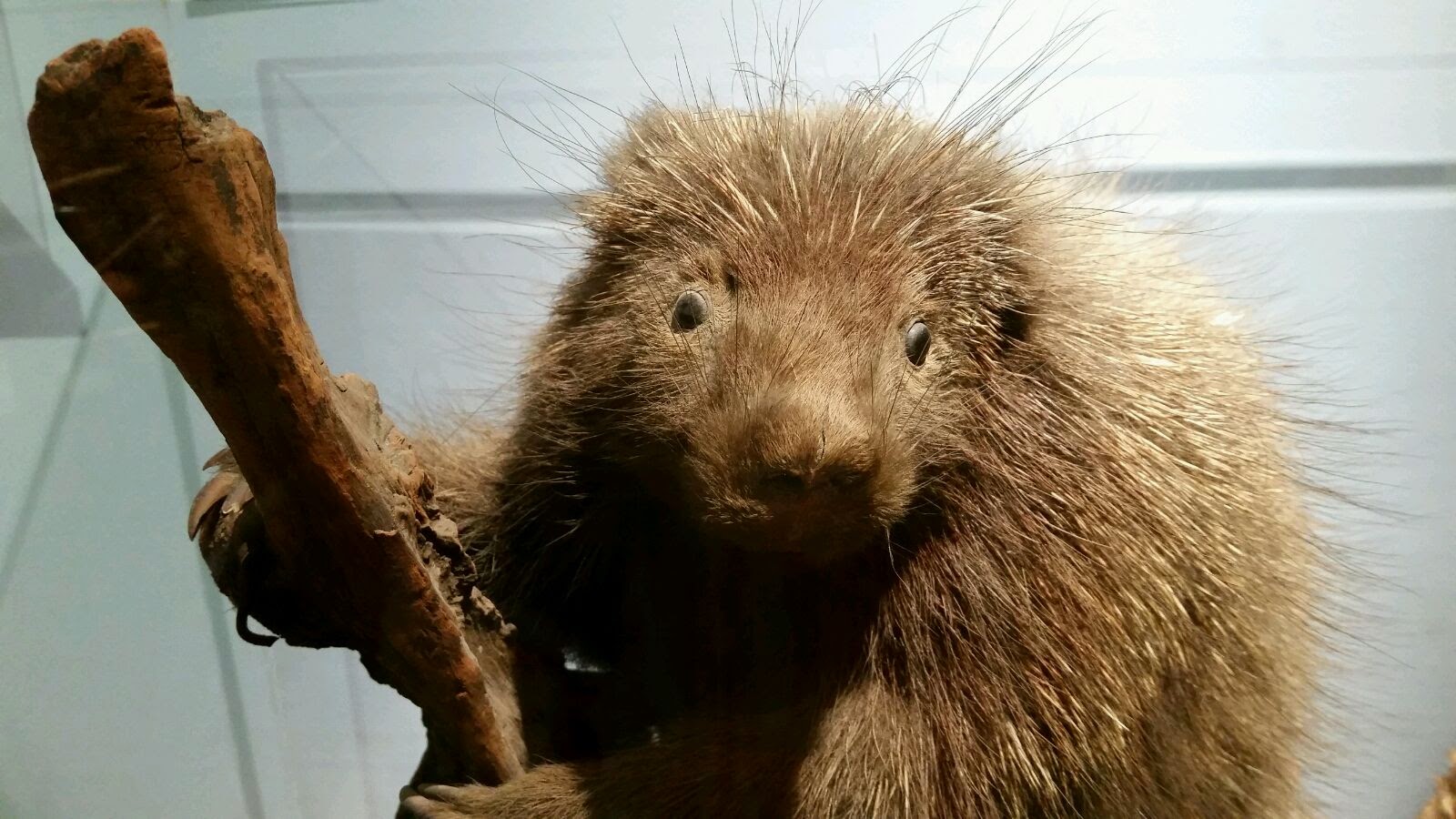 We hope you'll join Doug and the rest of the Champaign County Forest Preserve District Staff in celebrating the opening of our new permanent exhibit, The Grand Prairie Story, which includes Doug's friend the porcupine (above)!
Posted by Diggirl at 11:20 AM No comments: