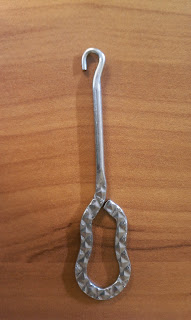 This week's mystery artifact inspired many clever guesses, including a cincher for laces, sardine can opener, fish scaler, decorative pie crust sealer, honey dipper, and nose-picker (although I hope you were joking, Susan)!  The guess 'cincher for laces' is not far off, although this handy little artifact came along to replace the need for laces on clothing or shoes:  it is a buttonhook, for buttoning up articles of clothing or shoe buttons.

A buttonhook is a helpful piece of technology, as can be seen in this video:


Although buttonhooks today are marketed as adaptive technology for patients who struggle with fine-motor skills, one hundred years ago buttonhooks were a necessary part of most peoples' daily routines.  They reached their popularity between the 1890's and 1920's, when most items of clothing, including jackets, vests, gloves, and skirts, were fastened with rows and rows of buttons.  A pair of boots alone could include over 50 buttons - which would take a substantial amount of time while dressing!  However, it was noted by Jerome Sholem, a shoe salesman from Champaign, that buttons were far better than laces.  He said, "I was happy to see the change.  I spent hours lacing and unlacing those tall shoes and I was sick of it."  (The Sholem family were cobblers who immigrated to our region, switching to shoe sales with the advent of mass-produced shoes; the Sholem building still stands on East Main Street, emblazoned with the logo "Home of Good Shoes"). 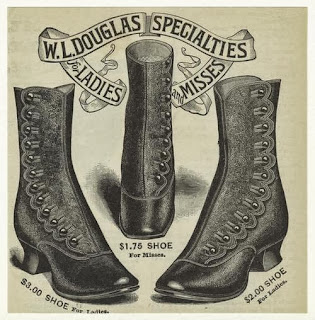 Buttonhooks were a time-saving invention that found at home on most women's dressing tables and, according to some sources, on many women's chatelaines, as well.   They come in all shapes and sizes, many marketed as part of a matched dressing-table set:

Buttonhooks also became a popular trench-art item during the First World War, with soldiers creating and sending home buttonhooks made from shell casings.  These examples are on display at the Bedford Museum, UK: 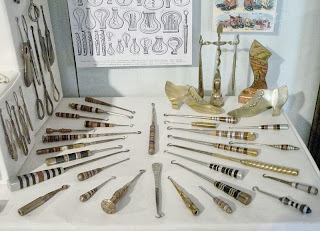 Add to the time spent buttoning clothing the fact that most fashionable middle- and upper-class women would make several changes of clothing throughout the day:  from morning dresses to tea gowns to day dresses to evening wear.  We may joke about "dressing for dinner" today, but it was very much a daily reality for women around the turn of the century!

Brown wool jacket, labeled "B. Altman & Co., New York,"
from the collection of the Metropolitan Museum of Art.

Buttonhooks were a necessity of life through the turn of the century, until the mass-marketing of zippers on children's clothing in the 1930's introduced a new trend in the clothing industry.  I, for one, am pleased that they did - I find it hard enough to get myself and my daughters out the door in the morning without worrying about a thousand-and-one buttons to hook!

Posted by Diggirl at 5:41 PM No comments:

Hooked on History - and Mystery Artifacts!

Here it is, short but sweet!  Another mystery artifact for this week: 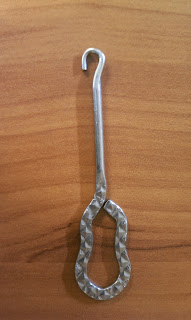 Take your best guess, either here or in the Facebook comments! 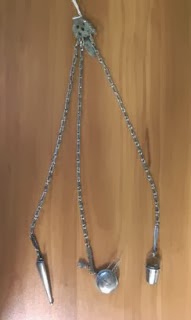 Last week's mystery artifact produced some interesting speculation, including a guess that it was a kit for testing for gold (great idea, RJD)!  Paula R. was closer with her guess that it was a sewing kit, even while noting "why it's on chains, though, I can't imagine!"  Kim S. and Jen W. ultimately knew the answer why it is a sewing kit on chains - this piece is an item called a chatelaine. 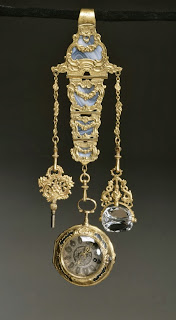 Chatelaines were both a decorative and functional piece of jewelry, worn hanging from the waist.  To the top hook, often adorned with a medallion, were attached chains from which hung useful items including keys, pocket watches, a vial for perfume or smelling salts, spectacle cases and writing implements.  Some chatelaines were used as needlework kits, similar to ours, which contains (from top to bottom in the photo) a scissor holder (with missing scissors), a round pin cushion, and a thimble-holder shaped like a tiny bucket.  Although we have no proof, I would speculate that the threaded top piece on the same loop as the pincushion used to screw into a hollow and cylindrical needle case. 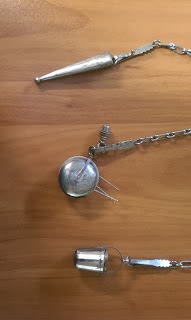 The name chatelaine derives from "La Chatelaine," which translated from French indicates the mistress of the castle household (or, as I prefer to translate it, "She Who Holds the Keys to the Castle")!  This well-written blog discusses the etymology of the name, along with a wealth of fascinating information about chatelaines:

This blog also includes these fabulous cartoons from the 19th-century British Punch Magazine: 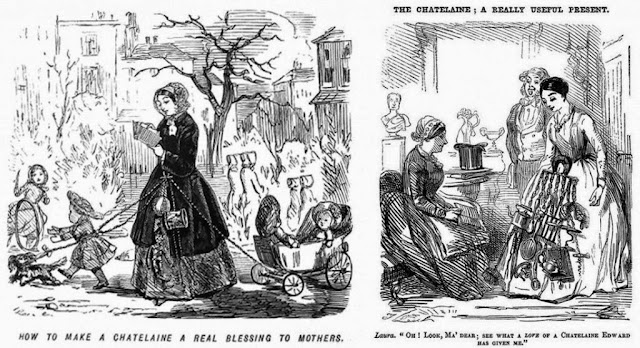 This blog, from Montgomery County near our old stomping grounds in Maryland,  showcases a really beautiful example:

Unlike with our chatelaine, the Montgomery County Historical Society is lucky enough to have a full provenance (history of ownership) of the artifact.

I leave you with a few more beautiful chatelaine examples.  This first one is from the collections of the Victorian and Albert Museum in London, created in France in the early 19th Century: 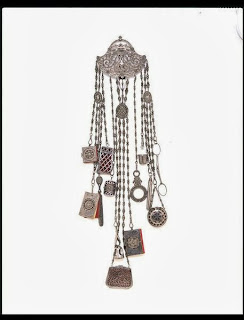 And this one, possibly my favorite artifact of all time, ever : 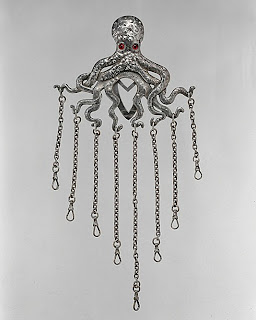 Any steampunk enthusiasts out there?  This incredible artifact, dating from 1887, can be found in the collection of the Metropolitan Museum of Art.

One more link, just in case anyone out there has been inspired to purchase a handy chatelaine of their very own (no joke - I'm beginning to think this is the perfect item on which to keep all my keys to the museum and various collections rooms!):

Although I have to admit, I'm having trouble deciding between the thistle and the pewter heart . . . .

Posted by Diggirl at 7:32 PM No comments:

It's Monday - Time for Another Mystery Artifact!

I actually had another artifact in mind for today's post, but in searching the collections to find it, I came across something so much more fascinating that I had to post it instead!  Here it is: 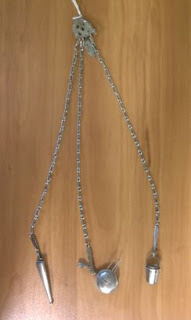 Because of the object's size, I have posted a close-up view of the items at the bottom: 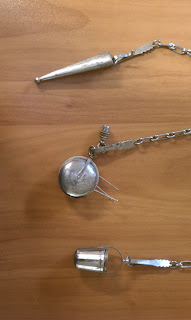 Give it your best guess!  As always, respond on our Facebook page or in the comments below with your ideas as to this beautiful artifact's name and function!
Posted by Diggirl at 5:14 PM 2 comments:

The Answer Lies Within...

This week's mystery artifact received a lot of guesses on so many different media! We heard from those who thought is was a woodworking tool, a nut pick for removing stubborn nutmeats, a spoon for snuff or cocaine and even a gunpowder loading spoon.  Thanks Penny, Jess and Jenn for your guesses!  Before I reveal the answer, let me just tell you that our Mystery Artifact this week is intimately connected to a little known substance called cerumen. No,that is not a character from Star Trek.   Cerumen is an antimicrobial substance naturally produced by your body. Guessed it yet? You might call these little instruments cerumen harvesters if you were so inclined. They are:

EAR SPOONS! (and cerumen is ear wax). Look inside the ear to see where ear wax is stored. 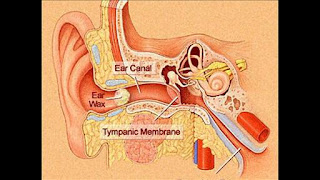 Man, with a glob of ear wax like that I think you might want to harvest it.

Ears build up cerumen to protect themselves from fungi, bacteria, insects and even your dirty fingers! All the best advice (today) is to NOT PUT ANYTHING IN YOUR EARS.

Why would you want ear wax so badly? Well, medieval illuminators used their ear wax added to the gesso to make the right consistency for their gold paint! 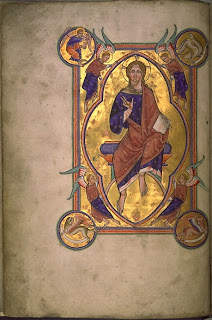 And frugal housewives of the 19th century (I kid you not) said ear wax was a great salve for puncture wounds and --get this--for chapped lips!  Women also used ear wax to wax their thread to make it glide more smoothly through the needle's eye and the fabric which they sewed. 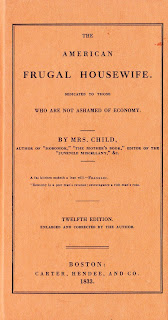 If you haven't read the Frugal Housewife, now is the time to start! There are all kinds of amazing tips in here.

Finally, be happy be happy that your earwax comes out!  Whales never get rid of their ear wax and sometimes it's the only reliable way to tell the age of a whale (by how much he/she has!).  Yikes, that is a lot of ear wax. Wonder how big that ear wax spoon would have to be? First an article on NPR about whale ear wax

and this on how to clean out your ears from one of our favorite blogs, Ask the Past.

Is it September already?

Oh, dear readers, here it is September 6 and we haven't posted a Mystery Artifact in over a week! Fear not, we have plenty of mysterious things in the collection yet to discover. In fact, this time I'm posting a whole class of artifacts. Tell me what you think these little numbers do! 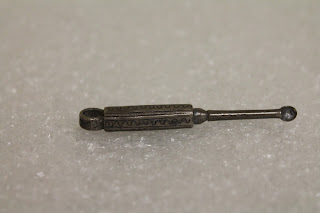 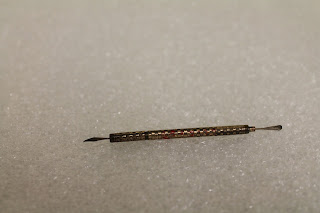 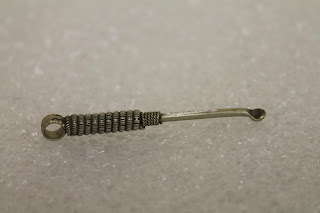 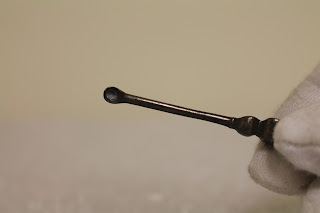