Despite some interesting conversation around what this object could be, including speculation that it was a button-hole cutter for 19th-century ladies' shoes, no one guessed our mystery artifact this week.

This is, in fact, a sugar cutter.  They are sometimes known as sugar nips or sugar nippers.

Instead of coming in the granulated form that we're now used to, refined sugar used to be sold in the form of a tall solid cone, otherwise known as a sugarloaf.  Sugarloaves were made by pouring the refined liquid sugar into a conical mold and letting the syrupy, uncrystallized sugar drip through a hole at the small end of the mold.  Then the sugarloaf would be wrapped in paper and sold.

Here is an example of a wrapped sugarloaf or sugarcone that is on display at the Museum of the Grand Prairie.  Do you know where it is?  In which exhibit is it located?

The sugar cutter would be used in the home to break these sugarloaves into smaller pieces.  Then, depending on the intended use for the sugar, people would put small pieces into their sugar bowls (for tea or similar purposes  - "one lump or two?") or grind them down into the granulated form most of us are used to today.

The sugar nipper featured as our mystery artifact is set on a wooden base, which was probably so one could put their full strength into cutting the hard pieces of sugarloaf. However, we have a few other sets in our collection, some of which are handheld like the example below: 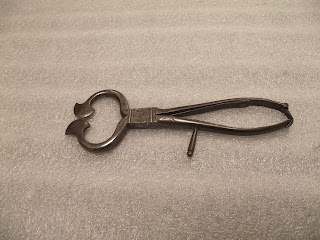 This set has a piece of metal sticking off the side of the handle to stead the cutter against the side of a table, in an effort to make cutting the sugarloaf a bit easier.

Here are a few more interesting examples from our collection: 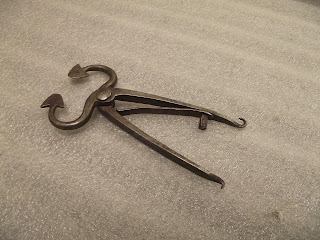 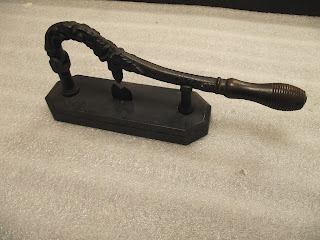 This one is unusual in that you put the pieces of sugarloaf into the center of the nipper, rather than bringing the sugar cutter to the loaf! I am sure having a custom-made tool for breaking up sugarloaves was much easier than trying to chisel lumps off with a knife or other utensil.

Our sugar nips will be on display at the museum this weekend, if you would like to take a closer look!  We hope to see you soon!

Cutting to the Chase: Mystery Artifact

Here is this week's Mystery Artifact!

As you can see, it looks vaguely like a set of tongs with pointed ends. They are set on a wooden base on a brass stand. 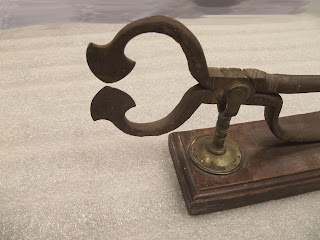 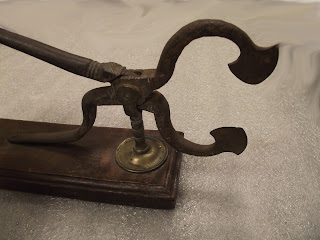 The handle moves up and down, allowing the pointed blades to cut. 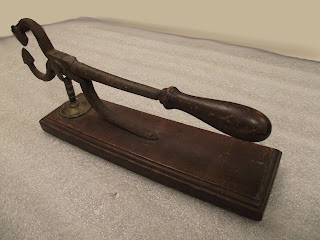 So what do you think? How was this artifact used?