Cracking the Case: A Mystery Revealed!


Here's a refresher on this week's mystery: 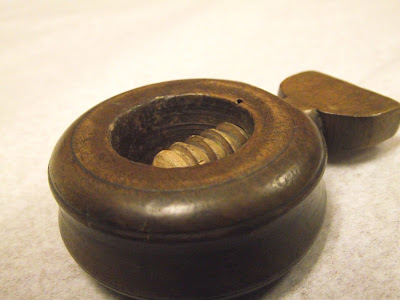 If you haven’t guessed already (or you didn’t know before), here’s a hint: there’s many different versions of this tool, one of which is mostly decorative and associate with the current holiday season.
Yes! It is a nutcracker. We actually had a few people guess correctly on facebook! Thank you all for your guesses.

There are three basic methods that nutcrackers usually use to open up the nutshell. These are: percussion (otherwise known as hitting it...), with use of a lever, or with use of a screw. Our mystery example obviously uses the last of these methods.

Nutcrackers have been around for a long long time. Even the earliest civilizations ate nuts and  probably used the "percussion" method, striking them between rocks to free nut from its shell. Even now many people use this method, but with perhaps more sophisticated tools. One more modern example of this is the use of a small mallet with a bowl that looks like the one below The raised portion in the middle has a divot where the nut is placed while it is struck to break it.: 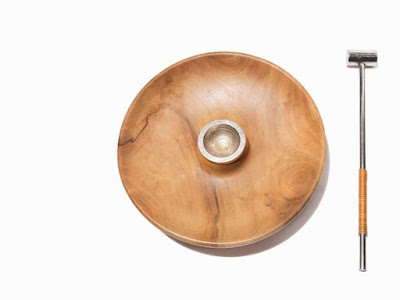 According to The Nutcracker Museum, as long ago the third century, people have been using lever-type nutcrackers to make cracking these nuts easier on themselves. The earliest were as simple as two pieces of wood attached with a hinge. There are many different versions of the lever type nutcrackers, including this common version, resembling a pair of pliers. 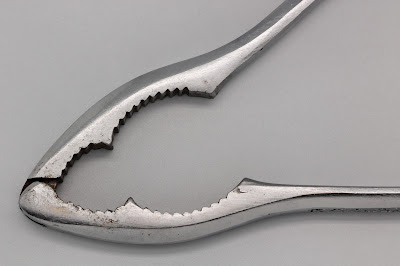 Screw-type nutcrackers were not invented until the 17th century. To use them, you put the nut into the hollow middle, and screw the screw apparatus down onto it. The reason you might want one of these kinds of nutcrackers is that the nutshell is theoretically less likely to crack and fly everywhere. In other words, they are meant to be tidier than the lever type. 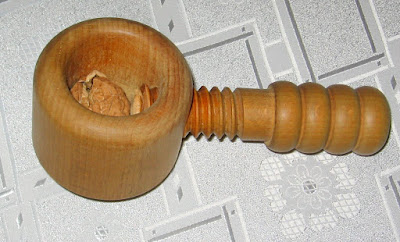 And of course we can’t forget this kind, which might be what most people think when they hear the word "nutcracker.": 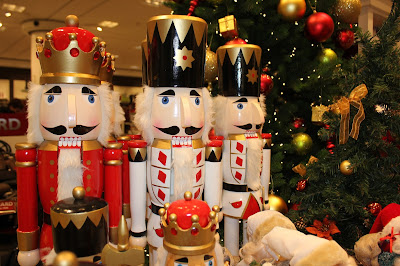 These were created in Germany in the early 19th century. Initially, they were made mostly to look like soldiers or kings, though now there are many different figures manufactured every year. Here's one made in the likeness in one of our favorite historical figures, Abe Lincoln! 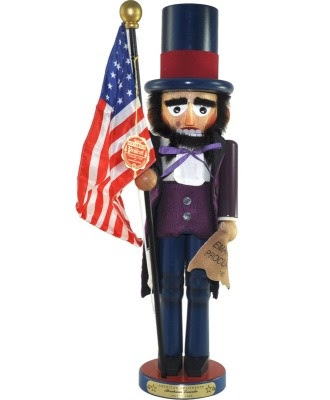 This style is very unlikely to be able to crack nuts anymore, however. They are almost exclusively decorative, and this article explains why they have become that way. We mainly think of these kinds of wooden nutcrackers as being the ornate and fancy ones, but it seems like every type of nutcracker has been subject to some fanciful designs, such as these ones: 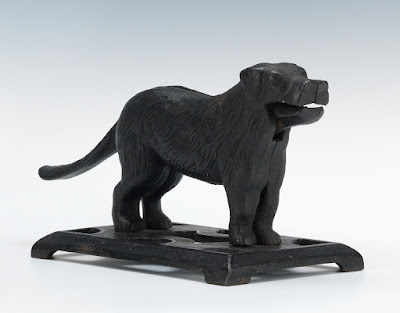 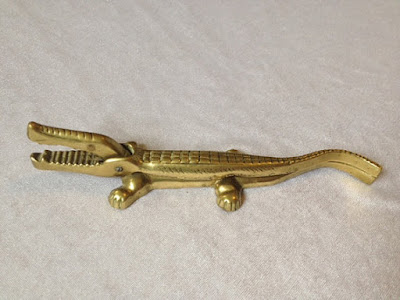 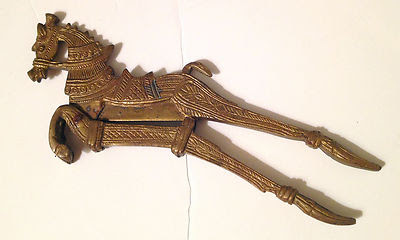 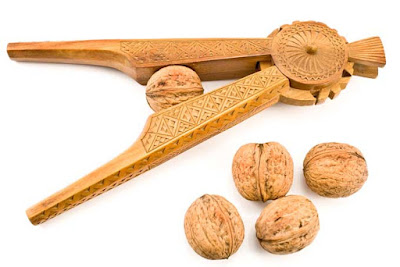 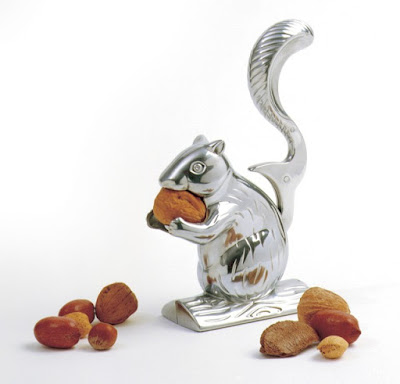 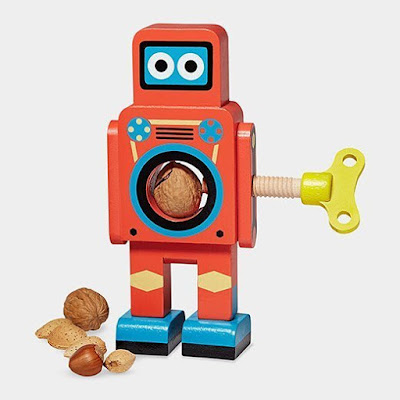 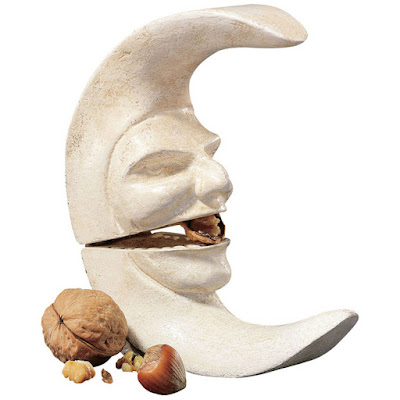 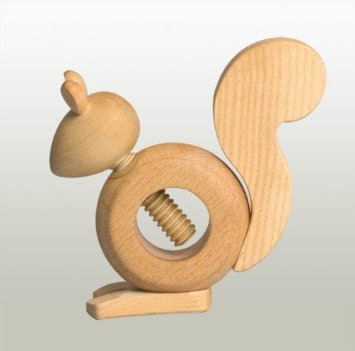 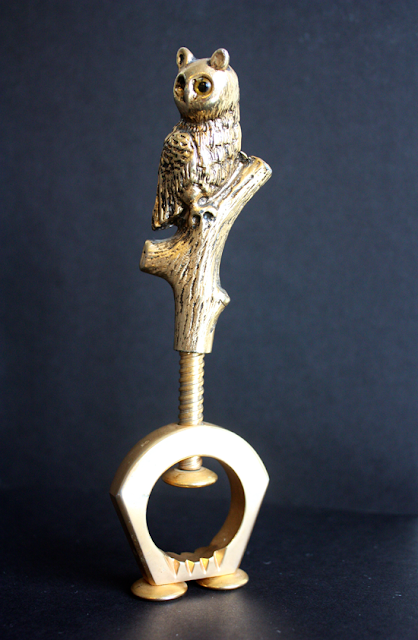 Which one is your favorite? I think mine might be the crocodile.

I hope you enjoyed these as much as I did, and all of us at the museum hope you have a happy and safe holiday season!
Posted by Museum of the Grand Prairie Collections at 8:37 PM No comments:

A Mid-December Mystery for You!

Hello again! I'm not sure how much of a mystery this one is, but I had never seen one of these like this until I came across it in our collection.

You might know it right away! Let me know if you do, of course. 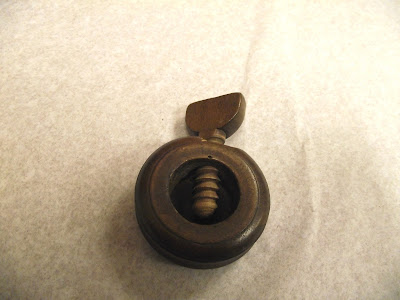 This artifact is rather simple, a small wooden circle with a hollow center; it's sort of a donut shape. On one side a hole has been made, and through that hole, a sort of screw apparatus has been inserted. The screw can be moved up and down, as seen below. 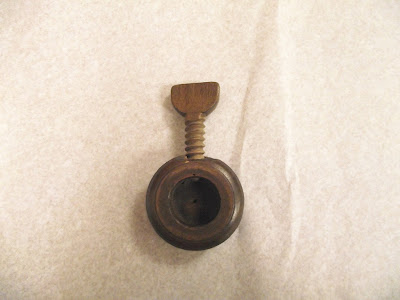 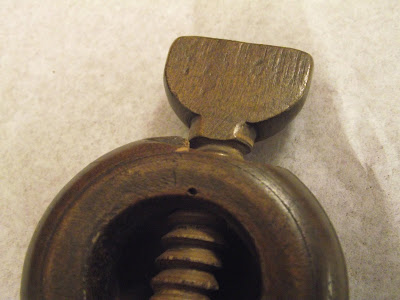 I’d better keep this short as I don’t want to give too much away.

Do you know what it is? Is it not a mystery to you? Let me know here or on our facebook.
I'll let you know more about it next week!
Posted by Museum of the Grand Prairie Collections at 10:00 AM 1 comment:

Smoothing Out this Mystery: Another Artifact Revealed!

We had a few guesses for this artifact, including a mud trowel, and a couple speculations about it being the "principal's paddle." The truth is perhaps not so exciting as these guesses. 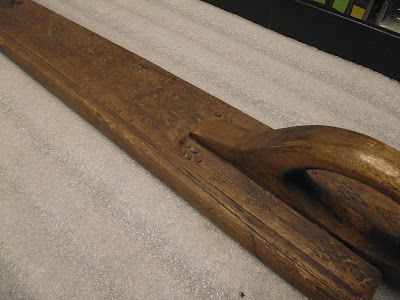 This artifact is “smoothing board” or a “mangle board.” Its function is similar to that of an iron, that is, to smooth out the wrinkles in a piece of fabric. But they weren’t used in the same way as irons. Instead of just pushing down on the fabric on a flat surface, a mangle board was used in conjunction with a roller, a large cylinder of wood not unlike a rolling pin. 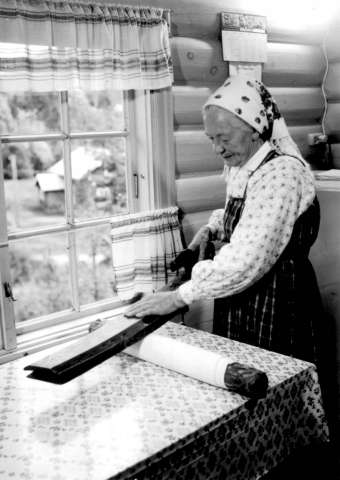 To use it, you would press down hard on the mangle board while pushing the roll back and forth.
This also sometimes help to squeeze out moisture. They eventually became obsolete with the popularity of irons and the mechanization of laundry in general.

Were you wondering why there are all those designs on our artifact? Are you now? Well, if you were/are, the reason is: these types of boards seem to have commonly been a courtship or wedding gift for a woman, and may have even been carved by a groom for his bride-to-be. Our example is not quite as elaborate as many could be. This other smoothing board in our collection is pretty neat. 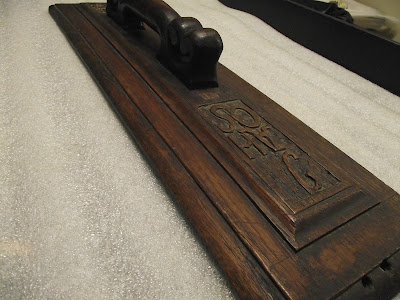 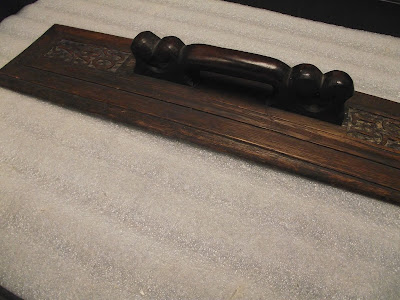 Many more intricate examples can be seen in the preview of this book “Mangleboards of Northern Europe” here.  (or they can be seen in a google image search for mangle boards). They really are worth a look! And so beautiful for such a functional and useful tool.

Come visit us to see this and other past mystery artifacts as well as our super neat exhibits! As always, thanks for reading.

Posted by Museum of the Grand Prairie Collections at 3:45 PM No comments: