Will We Stump You with This Mystery Artifact? 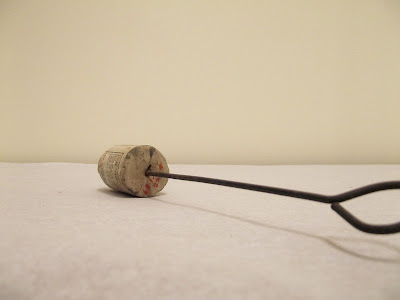 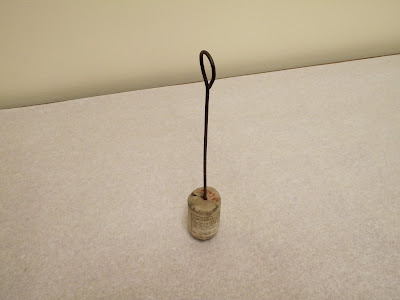 It’s a pretty simple artifact, as you can see. It consists of a thin metal handle, and a piece of cylindrical stone at the end of the handle. 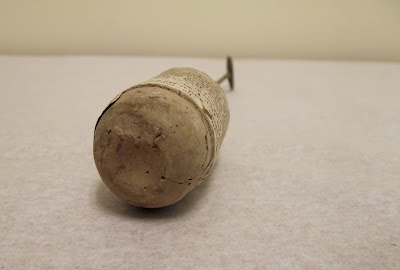 Ours has a label that explains how it works, but that would be removed prior to use.

Do you know what it is? Do you have a guess? Let us know in the comments here or on our Facebook page!
Posted by Museum of the Grand Prairie Collections at 12:00 PM 2 comments:

Shedding a Little Light on this Mystery Artifact

I thought I might stump our readers with this week's mystery artifact, but we got a correct answer from Brent on Facebook! Thanks to everyone for their guesses. 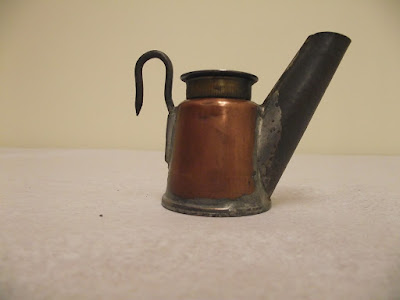 This is a head lamp! As in the kind that is worn on one’s head(not the car kind), and it was mainly used by miners. So, essentially, it is a very old version of this: 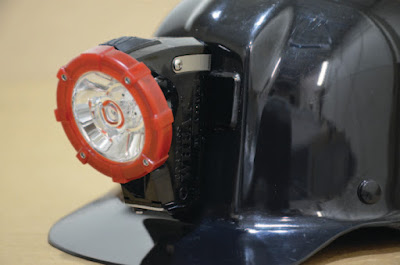 This kind of lamp is also sometimes called a teapot lamp (for the teapot-like shape), a sunshine lamp (for “Sunshine Wax,” a specific type of fuel made of paraffin wax mixed with oil) or an oil-wick lamp. The oil of the “oil-wick” goes in the center part of this lamp, and a wick would be inserted in the spout-like part of the lantern. And, as it is a head lamp, you might ask, “how does it go on your head?” Well, the hook on the back of the lamp hooks onto a hat or helmet. That would look a little like this: 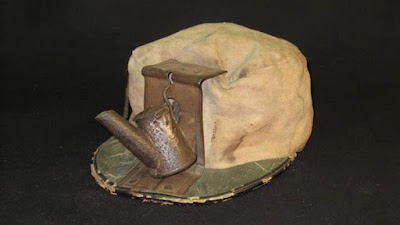 The first kinds of lighting in mines were candles or small lamps that were usually affixed to timbers or walls near where there were working. Since this didn’t always give precise illumination miners needed, candles were sometimes also affixed to hats. Eventually, oil lamps were created to fill these needs.

The oil lamps  burned brighter than candles did, and they were easier to carry around while working. However, the burning of the wick also created much more smoke than the candles had, which could make working in a small space very difficult. Also, the open flame was susceptible to igniting flammable gasses inside the mines. This could cause explosions, which often had disastrous consequences.

Eventually, a new type of lamp, the carbide lamp, became more popular for the fact that it consumed less oxygen and provided cleaner, brighter light. These lamps had two chambers inside, one with water and the other filled with calcium carbide. When these substances mixed, they created a flammable gas which burned with a clean white flame. They usually looked like this:


Even carbide lamps were short-lived, since battery-powered, electric lamps soon became widespread, and were much safer (since there isn’t the nasty problem of having an open flame anymore). If you want to know more about mining lights and hats, here's a site all about them from the National Museum of American History.


Thanks again for your guesses! And as always, come visit us, check out our exhibits and take a look at the mystery artifacts if you do!
Posted by Museum of the Grand Prairie Collections at 2:53 PM No comments:

Hello again, and welcome to the mystery artifact of the week.
Here is this week’s artifact: 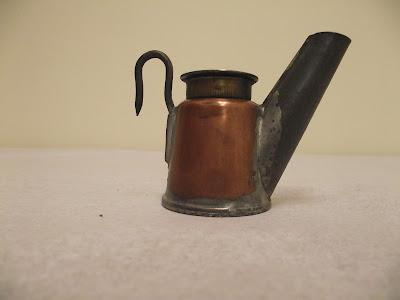 As you can see it is a cylindrical copper object with a front that looks like a spout, and a downward-facing hook on the other side. 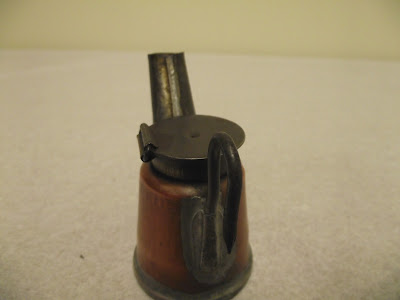 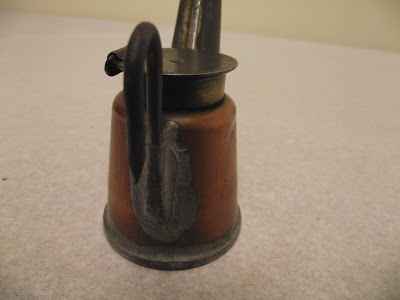 What may surprise you is the size of the artifact. It is only 2 1/4 inches tall at the center, and 4 inches wide from the end of the spout to the end of the hook. It is 6 inches around the base. So....it's pretty small! 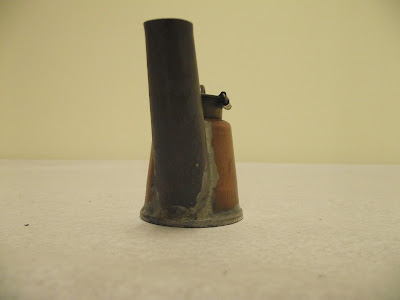 What do you think it could be? Please leave a comment on the blog here or on our Facebook page with guesses or questions about the artifact.
Posted by Museum of the Grand Prairie Collections at 12:00 PM No comments:

In case you missed it, here's what our mystery was this week: 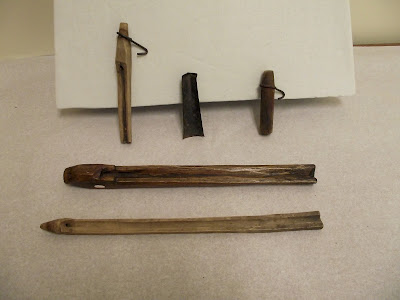 As some of you readers probably knew, these are spiles, used for tapping maple trees.

Tapping
What’s that? Well, I suppose you need to know how to tap a tree first. What “tapping” means is making a hole in the tree so sugary water (sap) can come out. This is done in late winter and very early spring because the sap freezes on colder nights. Then, during the day, the temperature is above freezing, the sap melts and can run freely out of the tree. Let the collecting begin! Later in the spring, trees begin to bud, which creates a chemical reaction within the trees. This usually makes for lower quality maple syrup.

A Brief History of Maple Sugaring
The earliest instances of collecting maple sap were done by native North Americans, who made slits in the sides of the maple trees and stuck a hollow twig or thin piece of bark into it. The sap would flow down into a wooden bucket placed on the ground. One “legend” explaining the discovery of maple syrup says that an Iroquois chief threw an axe into a tree, and the next day the tree leaked liquid. That day, the liquid was used to cook meat in, and they discovered it to have a sweet taste. Another story says that a branch of a maple tree broke off. From that fracture, sap flowed out and created an icicle, or “sapsicle,” which they realized had a sweet taste.

Eventually, instead of using an axe, which hurts the tree quite a bit (and can kill it if done too much), people started using augers to drill holes into the sides of trees. Our mystery artifacts were most likely used in conjunction with an auger. The hole is cut, and the narrow end was inserted into the tree. The sap then ran down into a container which was set underneath the spile, or in some cases hung directly onto the spile (which is why some of our mystery artifact examples have a metal hook on them). This is what a modern one might look like, although many people also use plastic spigots and tubing to guide the sap to its collection container: 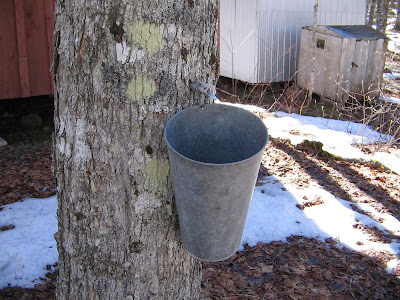 From Sap to Sugar
From that you can make maple syrup. How? Heat. The clear, watery sap that comes out of the tree has to be cooked down to make the brown, sticky syrup we know and love on our waffles and pancakes. Native Americans heated up  rocks and put them into the sap to heat it up. Eventually, people moved on to cast iron pots. These days, there are specialized “evaporator pans” which continually heat and cook down large amounts of sap, making them more efficient when making a lot of syrup (hundreds of taps-worth, for example).  It takes a long time to cook the sap that a tree produces down to the maple syrup that we put on the table at breakfast. In general, 40 gallons of sap makes about 1 gallon of maple syrup. Why do all that work just for maple syrup? What makes it different from store bought? Well, a lot of the time, the syrup that they sell at the grocery store isn’t even made from real maple syrup. It’s usually corn syrup, sometimes with “maple flavor” added. And in my opinion the real stuff from the trees is far superior.

Maple Sugar Days at CCFPD
Did you know that this particular mystery artifact has a connection to our very own CCFPD? We have Sugar Maple grove (or “sugar bush” as they are sometimes called) at Homer Lake that was tapped commercially from 1890-1942. At one point, around 400 trees were tapped!
In fact, for years we have held a program at Homer Lake Forest Preserve called Maple Sugar Days where families can learn a little bit about the process of tapping trees and making maple syrup. I'll leave you today with a few pictures with one such program. 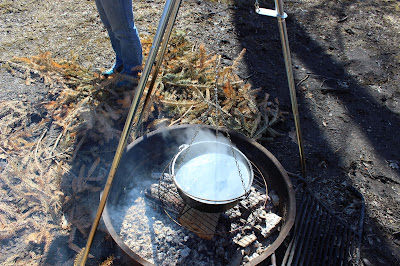 As always, please come check out the mystery artifacts at the museum. And while you're at it, check out our great exhibits too!

Posted by Museum of the Grand Prairie Collections at 2:02 PM No comments: