A Mystery Artifact Reveals the Fifty Ways to Churn Your Butter

This week’s mystery artifact (seen below) was a butter dasher! Does that name still confuse you? Well, the dasher is the part inside of a butter churn that moves and agitates the cream. The constant agitation of the cream in a churn separates the butter from the buttermilk. 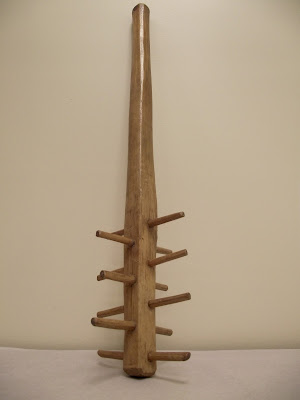 Our mystery artifact does not look like the normal dashers you usually see in the “plunger” or “dash” type butter churn. Those mostly look more like the examples below. However, our records do claim that this particular artifact of ours is homemade, so that may explain why it seems unorthodox. 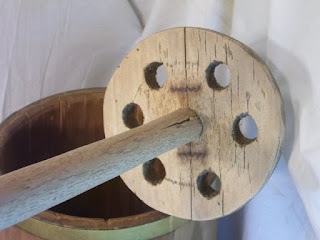 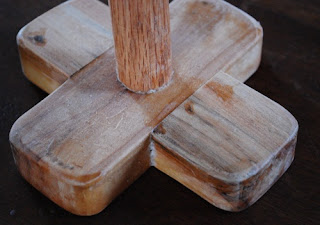 Butter has been around for a long long time. The word itself, seems to have come from an ancient Greek word "bou-tyron," which means "cow cheese." However, the Greeks mostly had goats and sheep, whose milk did not make butter. Most scholars think that they borrowed the word from the Scythians, who herded cattle.
The earliest devices used to make butter were simply animal skins. They were used as bags, and cream could be agitated within those bags simply by shaking them around. Some were swung on an apparatus made of sticks, like the one in the picture below: 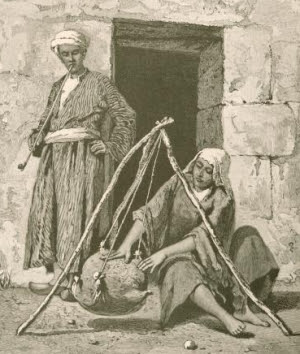 The dash or plunger kind of butter churn (the type our mystery artifact might have been used in) has only been around since the sixth century according to most. This artifact, found in Scotland, which has been determined to be a butter churn's lid, seems to confirm that fact.

The plunger type churn, while it probably the most well-known and identifiable type, it is not the only device used to churn butter. Other machines used to make butter were invented after hundreds of years using the plunger-type churn. They made the process a lot easier, and a lot less work. Here are a few examples(though there's not fifty ways, like this post's title suggests):

If you've been to our Prairie Stories event in September you may have seen someone using a paddle churn. With these guys, there's a crank on the top that spins around a paddle on the inside of the jar (or whatever the cream is put into). The paddle works much like a dasher, moving the cream to separate it. These are mostly small, and were likely much more convenient to keep around the house. 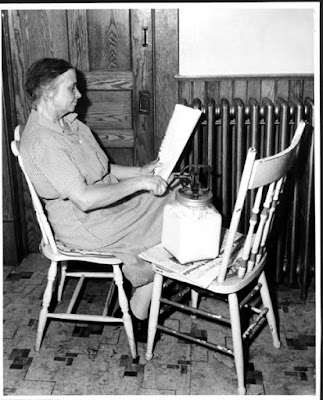 Another variety of butter churn is the barrel churn, which agitates the butter without a paddle or dasher moving around within it.These, as you can see, were named for their appearance, and were mostly used during the 19th century. One kind of this churn works like a paddle churn in that a paddle moved the cream around inside of the barrel to make the butter. These could perhaps be seen as a much larger, less household-friendly version of the paddle churn.
Another kind of barrel churn turns end-over-end with the use of a crank on the side.  They provided a much quicker way to make butter. They also did so without the use of anything like a dasher or paddle agitating the cream within the churn.

One last type of butter churn is the rocker churn. These also did not require anything to move the cream around. They can really be seen as a more modern and sophisticated version of the ancient animal skin method of churning butter.


I could go on and on about all the different types of butter churns there are in the world(yes, there's more!), but you probably get the idea. People had many ideas about how to make this food, and they all worked on the principle of moving things around to separate the buttermilk from the butter fat. Still, the most ubiquitous type is the kind the mystery artifact would be used in. 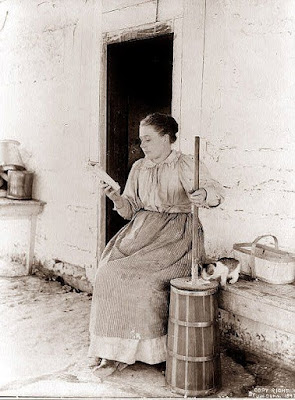 Thanks for reading this week's reveal! We'd love it if you came to visit to check out all our previous artifacts in person, or just to have a look around the museum.


Posted by Museum of the Grand Prairie Collections at 1:08 PM