Making Hay While the Sun Shines


Guesses
We had some great guesses, mostly related to gardening, for our mystery artifact two weeks ago.
Here they are:

OK. Maybe the last one wasn't a serious guess. But thanks for all your noble attempts!
But, we left you for a couple of weeks without an answer! OH NO! While we have a few minutes here, I will "make hay while the sun shines." That idiom of course refers to the cutting (harvesting) of hay while the weather conditions are favorable.

The artifact in question from two weeks (gulp) ago is in fact a hay knife.

First we'll discuss the idiom, then the processing of hay and finally, the artifact!
When is a favorable time to cut hay? When the sun shines of course.
Why? Because dry hay is best for storage. Hay, made from various grasses,  is the mainstay food for horses and cows during the winter time.  Hay is also handy to have around in case there is a drought and animals are starving for greens to eat during the summer. However, wet hay can grow fungi which makes animals sick. And wet hay, as it decomposes, can actually catch fire from the heat generated by the decay.

The process
You may be saying to yourself, our artifact doesn't look anything like the tools people are using in these pictures. And you would be right.

Hay is cut, then raked into rows or small piles or windrows and laid in the field to dry for several days.  During the drying it is turned and moved to enhance drying with an implement called a tedder
It is then stacked, or baled.

Stacks and bales
Do you know your stacks from your bales?
Teddy Roosevelt is standing in front of a haystack in this photograph. Stacks are conical shaped so that the water may run off and allow the hay to be stored outdoors. Sometimes haystacks were covered with thatch (a roof made of dry vegetation such as straw)  to provide a kind of raincoat for the hay.

So what then is a bale? A bale can be square or round. A square bale is small and
easily manuevered by a single person. They are particularly sensitive to getting and remaining wet and so they are usually stored in a barn. It is easy for them to be lifted into the attic story of a barn called the hay mow or hayloft.

To the left, a British woman farmworker (they were called landgirls during World War II) unloads an 80 lb. square bale into a barn. Note the hay hook she has in her hand. Hooks were used to lift the bales and move them. We have several hooks in our collection.

The windows on the second story of a barn are where the hay went in to be stored in the haymow or hayloft. This Japanese American  man is nailing his haymow shut before he is evacuated to an internment camp during World War II. \

Today bales of hay are much larger and round, the work all being done by machine.

You can watch that happening on this video. It's fascinating how much work can be done quickly

So...what do you need a knife for? and in what universe is this a knife?

Great huge piles of grass (hay is a variety of types of grass, not grain) tend to stick together and get very hard to cut apart. You can only feed a little hay at a time to your animals, so you have to be able to move smaller pieces off of the stalk or bale and into the area where you feed. At first hay knives just looked like regular knives, then someone invented the "lightning" knife which looks a bit like a saw. And finally, by the end of the 19th century Heath invented a vertical hay knife. It works by cutting and tearing the hay at the same time.  Below are four hay knives in our collection. 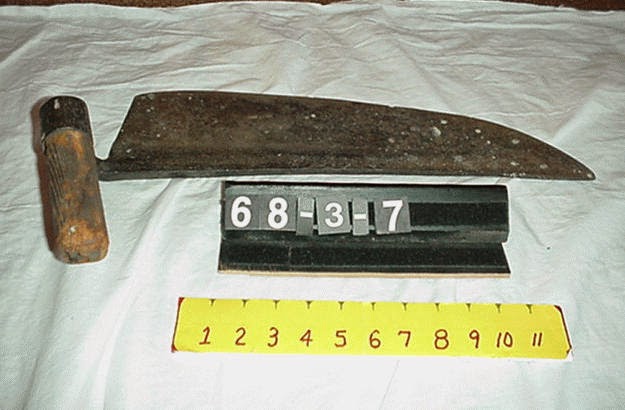 A fascinating and frightening video of the use of the "lightning" hay knife (so named for it's zigzag blade) shows how much balance and patience is needed for farm work. 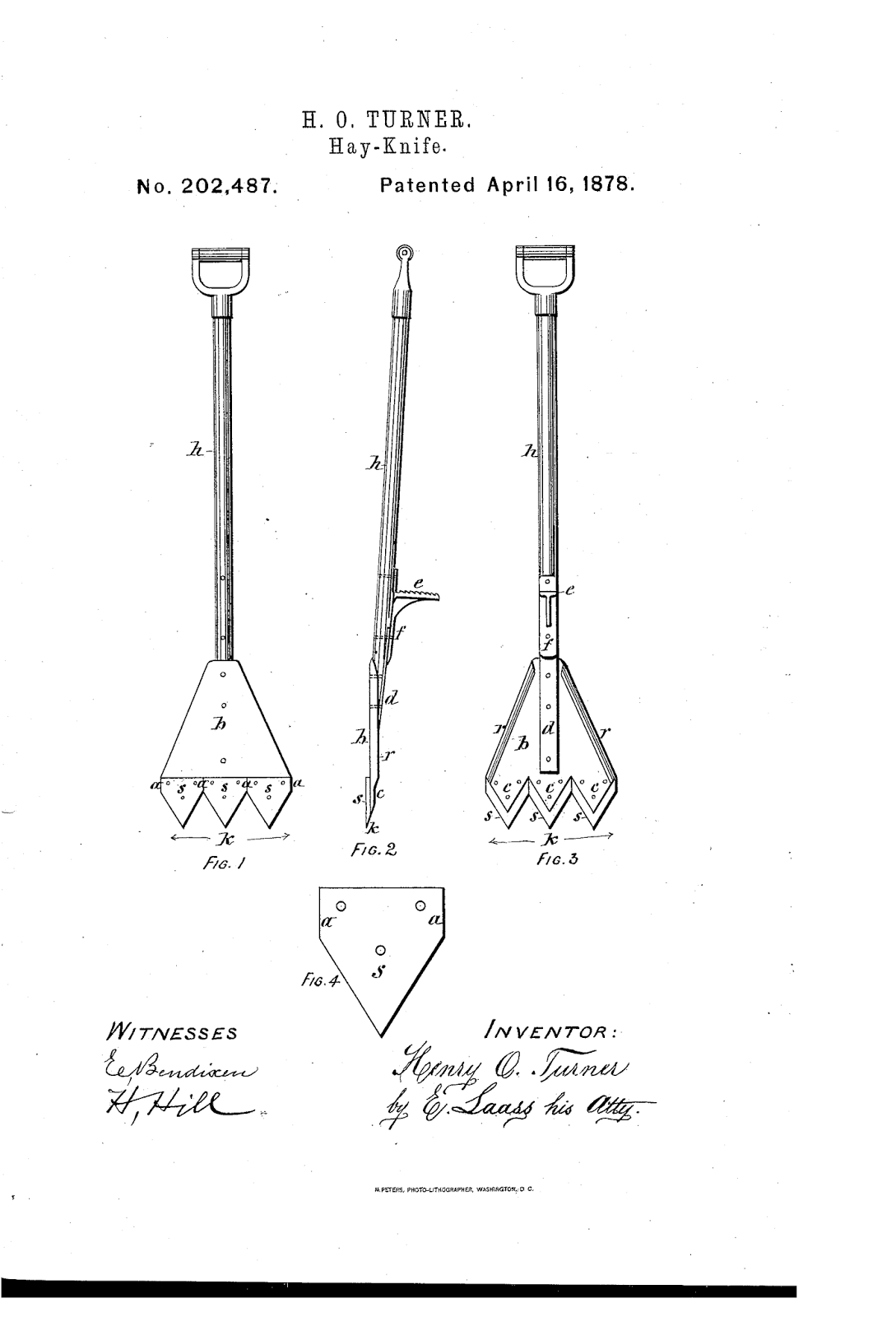 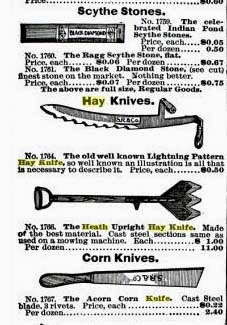 This brings us to the mystery artifact! A late 19th century invention, we know from the Sears Catalogue that the Heath knife was meant to imitate the cutting action of larger mowing machines.

And we know from several patents that this was the most popular new way to cut hay in that era.
For all the pictures you will ever want to see about Hay in Art, and who said that you couldn't find everything on the Internet, see this database:
Hay in Art

Phew. That was a long post. I think I'll hit the hay. Figure that one out. I bet you can think of a few more hay idioms. Why don't you post them in the comments?